Shake Your Brain: The Opportunity of Choice

Today’s guest is an Olympic 400 meter hurdler and the founder of the Believe Institute. As if that wasn’t enough to catch your interest right out of the gate, she’s also a past contestant on the Amazing Race Canada.

From the moment I met Sarah, her energy and enthusiasm gave me a shake. So get out a pen if you can, because she’s got a lesson we all need to hear.

Laurie: Welcome to Shake Your Brain, Sarah. I am so glad you’re here.

Sarah: I’m excited to be here. Thanks for having me.

Laurie: Absolutely. So in just a moment, I’m going to tell everybody yhy I invited you to the show. But before I do that, I’m going to ask you one simple question, but I did not want to know in advance what your answer was going to be, because that way I can organically decide if you’ve made me go, “Hmmmm, that’s good!” So here’s your question. Sarah Wells, what’ve you been thinking about lately?

Sarah: Okay. Ready? I’m hoping I’m getting the organic reaction I’m looking for. Here it is: make choices, not sacrifices.

Laurie: Make choices, not sacrifices. I am intrigued. Keep talking.

Sarah: So what that means is, no matter what we’re pursuing in life, so often we want to know “What’s the right choice or…and if I do make that I’m sacrificing this other opportunity?” And I know for me and sport, people would always tell me, “Oh my gosh, you must have had to sacrifice so much to get to where you are as an Olympic athlete.” And I always respond like, it wasn’t a sacrifice, it was a choice. And so I encourage everyone to make choices not sacrifices. And how that can manifest in your life, like I said, you pursue something, we always want to make the right choice. But no matter the obstacle you’re facing, no matter the number of choices, no matter the list of pros and cons, as long as there’s a reason why you might want to pursue either path, then it’s so important that you lean into the unique opportunity that that choice provides you, because you’ll get the most out of it.

So two examples. One is, I was on the Amazing Race Canada recently. And that’s a wild adventure in itself, we can do a whole other thing on that but on the Amazing Race, if anyone’s watch the show, it’s like this epic scavenger hunt all over the world and you have clues that tell you where to go, the challenges are preset you’re stuck with the same partner the whole time. You’re at the mercy of the producers and so your hands can feel tied at this moment, you can feel like you don’t have a choice, but you always have a choice in the mindset you adopt when facing that next challenge. And so in a moment like being on the Amazing Race remembering that you have a choice is step one.

Step two comes from an example of my fiancé. He’s Canadian like me, and he went to school in the US. And in those four years he had been away from home and obviously had lost touch with a few of his good family friends of his, his parents his siblings. And so when he finished school, he got a job opportunity back at home and he also had another one over in Europe, and so he was like, “oh man, what is the right choice because Europe is going to provide me this unique opportunity to go and travel on the weekends and see all these different things and then I’m also going to be able to like explore different countries, different culture different food. But if I go home, I get to reinvest in those relationships. I get to be near my family.” And so what is the right choice?

Laurie: I think that’s a perfect setup for where we are today that there’s so many businesses talking about, you know, what they have to change. It could be that everything’s changed forever. And so, anybody who feels that it’s been done to them like, which is the right choice?” this really plays into that same mindset, which is “Let’s embrace what’s good about these different opportunities.” That’s really good. I like that!

Sarah: Exactly. You have to lean into the unique opportunity that this provide you

Laurie: Oh, I love it. I’m going to noodle on that some more. You actually did make me think so! So, now I get to tell everybody listening why I chose you as one of my first guests for this show. You and I were both at an event one time, subdivided into small groups, and you and I had never met, and we were assigned to this group together with I think there was eight or nine of us. And what happens is, each person is center of attention for 30 minutes and they get to say what they want to work on. And I chose to give a very vulnerable thing that had been going on in my mind and looking for feedback. And the advice that you gave me was definitely a brain shake! It had to do with talking about the “one stride difference.” Do you remember this experience?

Laurie: And if you will, please retell the story as best you can, so that the people listening can get the same “a ha!” that I did about the “one stride difference.”

Sarah: Yes, so…I think, you know, as you mentioned, you are sharing something about kind of having your own voice of self doubt and feeling like you weren’t doing enough or weren’t performing at the level you wanted and I know for me, being a 400 meter hurdler, the way that my race works is it’s one big lap around the big outdoor track and there’s 10 hurdles around the whole track. Most Olympic-level 400 meter hurdlers take 15 strides for the first like five or six hurdles, and that’s a race plan that has set up multiple Olympic medalists. Now for me, I actually don’t have as long of legs as people think I do! Even though I’m a hurdler, not everyone does have long legs. And so, while the Olympic race plan that most people would do is 15 strides between each hurdle, we tried that, my coach and I, and it just didn’t work. Like my for my stride length and the way that feels comfortable, easy breezy with effort at like 90%, to make it flawless and smooth, it just didn’t work. We actually decided to add a 16th stride, and that one stride difference actually enabled me to be just as fast as those other Olympic-level hurdlers.

I think so often we can we can feel like we need to fit into the mold of what has been successful in the past. But it’s about knowing what works for you, because there isn’t one mold. There isn’t one way of doing something to success. And so for me, adding that 16th stride allowed me to run a world class time.

Laurie: It just…it just made my head go… “My gosh!” I mean, there’s so many industries where they think they need 15 strides, whatever that means, in their world. And it never occurred to them, “what if we added a stride or took a stride away?” Again, you could go on either side of this…

Sarah: What is the way that you can modify to play into your strength. And honestly, it lends itself to what we talked about before, about make choices not sacrifices. How can you choose opportunity for your limitations for the boundaries you have to play into.

Laurie: Absolutely. Now, did your competition know, care or judge you for doing it differently?

Sarah: I think if they were to watch race tape back, they might be confused. Like, “wait, what does she do, did she just add an extra stride?” It would throw them off for sure, because they’ve potentially made an assumption that there is no other way to do it because that’s the way they do it, that’s the way that has been proven successful. They might then assume like, “Okay well then she’ll never, I don’t have to worry about her then because she won’t, she won’t catch up. But it’s like, that actually allowed me to deliver a better result. And so I think that there was probably some shock and some judgment. But as long as you can follow up with results, it’s like, who cares?

Laurie: Yeah, I think we have to stand really tall in our confidence in being different. I guess what I’m trying to get across is when we hit that stride, when you did well in your trials, you knew that your process worked and you didn’t need somebody else’s approval to say, “You go girl,” right?

Laurie: I love that. So the second question, and final question before we sign off and let you get back to what you’re doing is, for people listening: if you did shake their brain with your example, what would you encourage them to go do? What’s the first action you want them to take after listening to us talk?

Sarah: I think the first action is painting a picture of exactly the outcome that you’re trying to deliver and then listing out in a separate column, “What are the strengths of mine that play into allowing that outcome to come true?” And then figuring out what are those gaps? How can you fill those with other people, other resources? And making sure that you understand what you should be taking control of, what is actually in your control, to then go and apply to get to that end result. So listing out what is that clear picture of the outcome you’re delivering and then where are you going to be best applied for that outcome.

Laurie: I love it. And someday we’re going to see a book that’s called “The One Stride Different,” because if you don’t write it, I’m going to. Thanks for being with us. I always love talking to you and good luck on your future married life. Way to go.

So what’s your one stride difference? I’d love to hear it. 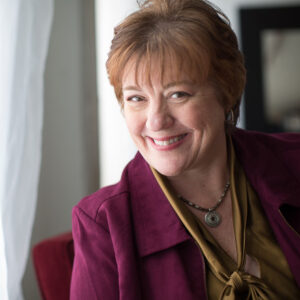 Posted in Shake Your Brain

Who will you carry in your pocket?

What are you seeking? Set Your Intention and Go After It!

Rest: It’s No Longer Optional! – Bust Out of Service Fatigue